Uncovering the mystery of the carved wings on an Easton house

A special report by Roy Croft

When Paul Way answered the knock on the door of his Easton-on-the-Hill home back in the summer of 2012, he welcomed a small group of people with quite a story to impart, and the answer to a riddle.

Since buying his Church Street property in 1971 he had often pondered the origin of the parachutist’s wings carved in the stonework at the back door of his house. 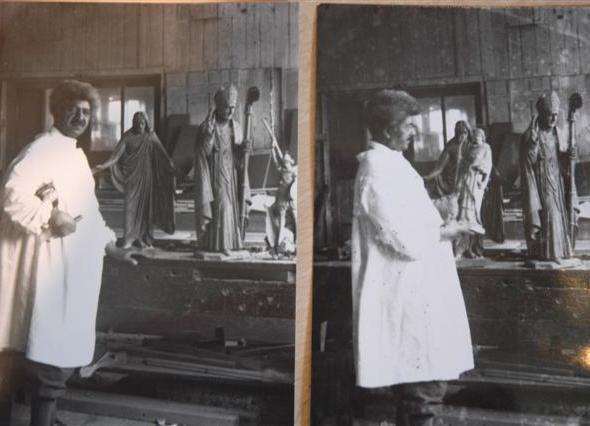 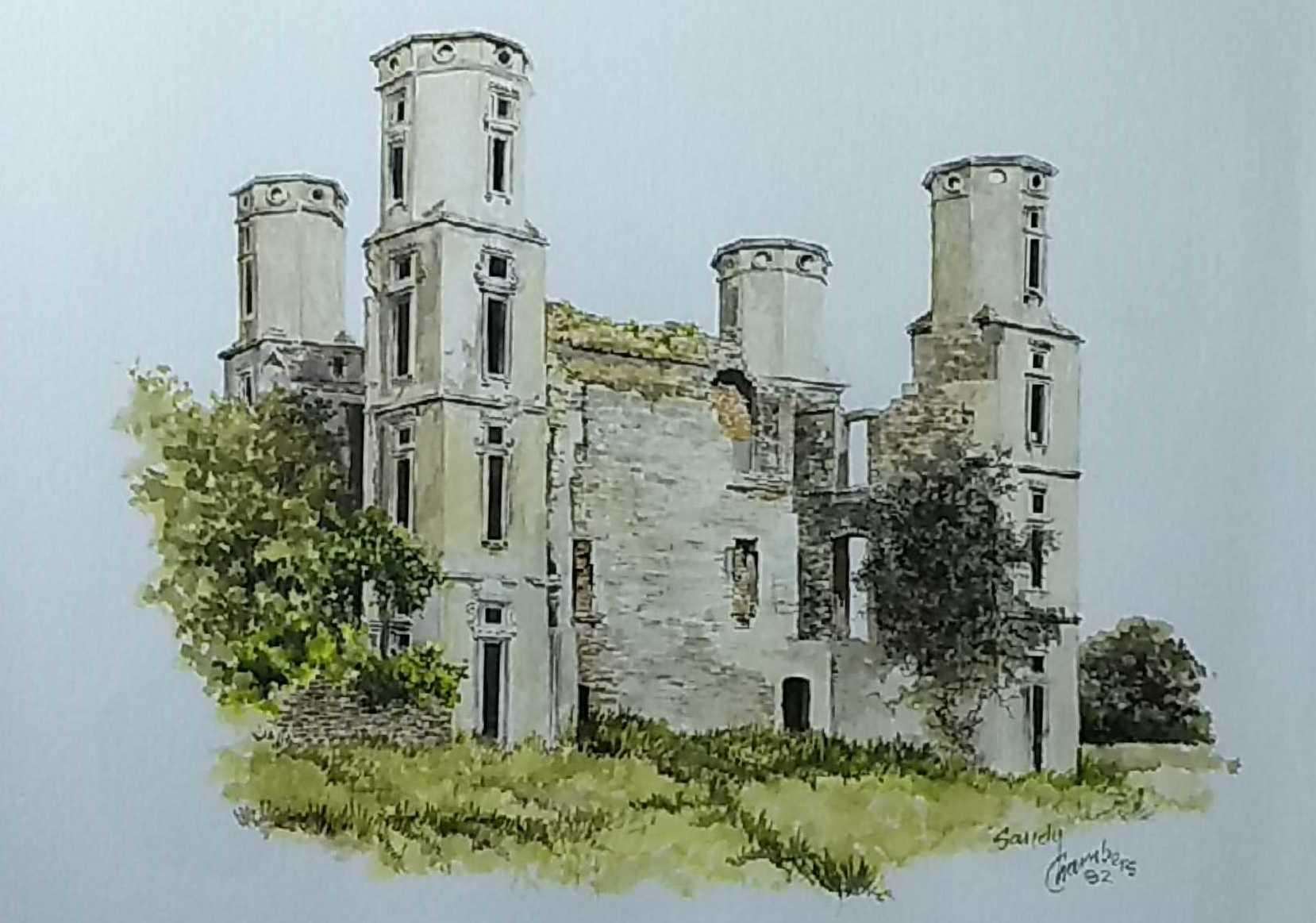 For some 30 years Paul had studied the ‘wings’, never knowing their creator, yet quietly hoping that, well, perhaps one-day he would.

The simple, small carving had remained a mystery until that June morning.

Yet in a just a few moments of receiving that rap on the door the mystery would dissolve with a few words.

Among the small family of visitors, from Western Australia, Paul remembers a ‘sprightly octogenarian’ who declared that the Church Street property had once been his home 50 years previously. He immediately invited the group into his house anxious to learn the secrets of the small, now heavily weathered, carving.

The elderly man turned out to be Sandy Chambers, a born and bred Easton man, who has just celebrated his 92nd birthday at his home in Boyup Brook in Western Australia.

He explained that before setting off to war-torn Palestine in 1946 he had simply left the wings as a memento for his parents. Because Sandy was an artist, a carver and a sculptor, this was his way of leaving a little something for his mum and dad, not knowing what his future had in store.

As a fit 20 year old he had just completed army training in spite of serving the dark years of war in the darkness of a coal mine, not as a soldier, but as a Bevin Boy.

The rich intrigue of his seminal years up to leaving for Palestine is well balanced by the success of his life in Australia.

After shivering through the arctic winter of 1962/63, Sandy, his wife Jacquie and four young children embraced an opportunity to become ‘ten pound Poms’ and migrated lock, stock and packing cases to the warm sunshine on the other side of the world in Australia to start a new life.

Their newly built home, “Sandlyn,’ in The Deeps, Collyweston, was incomplete with many jobs needing to be finished. Yet the man’s drive and enthusiasm to explore new avenues in his life had to be satisfied.

Accidents and misfortunes in their first year left them broke and bereft, but they were determined to leave their ill-luck behind them by adopting, and being adopted by a small town three hours south of Western Australia’s capital, Perth, named Boyup Brook.

This is their story, which covers over half a century of guts and hard work leaving a legacy of which their family can be truly proud.

Leslie Martin Edward Chambers was born on October 27, 1926, the only child of Mr and Mrs Jack Chambers, his rich and varied life has been divided equally on opposite sides of the world.

Brought up in Easton, his earliest memory, at the age of five, when he was deposited near to the village tap and pond in Church Street where he floated sticks ‘Pooh-like’ whilst his parents humped belongings along the roadway as they moved into a ‘new’ home - in conditions that today would be considered poverty.

Education was at the Easton Garford Charity School, under teacher Mr W H Tillson, who had also taught his father. It was here his love of drawing, gardening and geography started.

When Tillson’s commitments meant that he had to supervise more than one class the teacher entrusted Sandy to coach his fellow pupils in the finer points of drawing. He even made the boy directly responsible for the care of his trilby hat as their art subject.

At the age of 14 he entered Bowman’s workshop in Cherryholt Road, Stamford.

He was taken under the wing of Mahomet Thomas Phillip, a sculptor and wood carver, who became Sandy’s teacher as well as mentor in the artistic crafts of carving and sculpting.

Mr Phil’s encouragement and teaching set Sandy on the path to a career of almost 80 years in carving, watercolours and sculpting, leading to wide recognition throughout Australia.

Later in the Second World War he was conscripted as a Bevan boy, leaving Bowman’s for the training colliery at Creswell in Nottinghamshire with a tinge of sadness.

Sandy’s contribution to the war in a coalmine ended after VE and VJ days. And also his stint in the ‘army.’ Or so he thought.

But that was not the case and he joined the Royal Engineers, volunteering for the airborne section.

By now it was 1946 and Europe was awakening from six years of war. But there was still work to be done by the armed forces in the Middle East and it was off to Palestine for Sandy – leaving the carved wings on the wall of his parent’s home.

However his two years in the service of King and country soon passed and before long he had to face Civvy Street.So it was back to Easton and the home of his parents that the trim soldier returned, becoming the house carpenter on the Burghley Estate - but this job did not last.

Without a source of income, Sandy little knew that this chicane in his life would allow him to expand his skills in the industry. Building new structures was a future he could now contemplate. One of the houses would become his home for his future wife and four children.

He became a shuttering carpenter on the RAF Wittering runways. From Easton to Wittering airfield was only a couple of miles bike ride and with his tools he set off for what was to be a long association with civil engineering on the airfields of eastern England.

There’s little doubt that Sandy’s success as a builder and artist have been due to his outstanding talents. Nevertheless without the support and home skills provided in the background by Jacquie, the mother of his five children, brickie’s labourer and lifetime tape holder, the artisan would have been left wanting.

The 17-year-old Jacquie Gigner lived in Drift Gardens, Stamford, working in Marshall’s bakery shop in High Street. They met through Sandy’s work in the bakery removing the old shelves so new ovens could be installed and a four-year courtship ensued.

By 1964 the Chambers family (now six in total – with children Mark, Gary, Linda and Diane) had had enough of the cold winters and privations of rural England and took the decision to migrate to the sunny climes of Western Australia, sponsored by the then the Vicar of Easton, the Rev Peter Robinson.

But within three weeks of arriving in Australia’s remote south western corner life was going to take an ominous turn for all the Chambers family, with two-and-a-half year old Diane being pushed over and breaking her leg in two places.

That same winter Sandy was involved in an accident between his car and a school bus which left him in hospital with a fractured spine. After 13 weeks flat out in hospital he started walking with a frame and crutches.

Boyup Brook’s gain has been Stamford’s great loss. From the tutelage of Mr. Phil as a teenager at Bowman’s, to a career building, carving, painting, sculpting for the enjoyment of generations in Australia, spanning almost 80 years, Sandy will continue creating as commissions and requests still keep him busy.

As I come to the final page of Sandy’s story, his work-hardened hands have taken up another tool as he pens his own words of his life story - something his family will treasure.